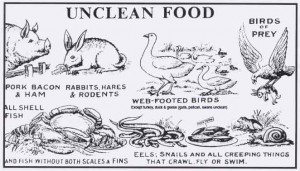 Mark 7:18-19 Don’t you see that nothing that enters a man from the outside can make him ‘unclean’? 19 For it doesn’t go into his heart but into his stomach, and then out of his body. (In saying this, Yeshua  declared all foods “clean.”)

Notice the part in the parenthesis (In saying this, Yeshua  declared all foods “clean“).  Really, is this true? Could it be that Yeshua has went against HIS own father’s Torah given to Moses at Mt. Sinai and decided to change things?  Did Yeshua finally get caught teaching something that was not taught from the beginning? If this is the case they would have crucified HIM immediately as HE would have “sinned” against the Torah.  Well guess what?  HE sure didn’t.  That last part of the verse in parentheses (In saying this, Yeshua declared all foods “clean”) never appeared in the original texts. It was inserted over the years into our Bibles.

Our theory is that the Advisary has had his way, once again, with the world and infiltrated our Sacred Text. If you read the NIV, ESV, NASB95, and many other versions, that part is in there. Sorry but this is where it gets lengthy!!! Now let’s break down this part of the verse.

Mark 7:18-19 Don’t you see that nothing that enters a man from the outside can make him ‘unclean’?

The Greek word koinos/koivoc translates to mean unclean in the verse above but we will show that the word κοινός KOINOS truly means “MADE COMMON” and not unclean.

Titus 1:4 To Titus, mine own son after the COMMON faith: Grace, mercy, and peace, from Elohim our Father and the HaMashiach Yeshua.

The Greek word for COMMON in this Titus verse and Greek word for unclean in the Mark verse we showed earlier are the exact same Greek words but translated into English differently.  The word in Greek is Koinos/Kovoic . So if it truly means unclean in the Mark verse then that would mean Paul is telling Titus that their Faith in Yeshua is unclean. Is our Faith in Yeshua unclean??? No, it is PURE and the only way to salvation.  So try that again but use the incorrect translation and put in “unclean” instead of Common.

Titus 1:4 To Titus, mine own son after the UNCLEAN faith: Grace, mercy, and peace, from Elohim our Father and the Mashiach Yeshua  SOUNDS BAD doesn’t it???  Now onto the next example.

Acts 2:44 And all that believed were together, and had all things COMMON; (The word COMMON in this verse is from the same Greek word Koinos/Kovoic. If we take this as meaning unclean, as in unclean in the Mark verse, then this verse is saying that all the believers were gathered together and have everything unclean.) Do you think believers walk around with every thing they have being unclean to our Messiah?  Nope.. SOUNDS BAD doesn’t it? Now onto yet another example.

Jude 1:3 Beloved, when I gave all diligence to write unto you of the COMMON salvation, it was needful for me to write unto you, and exhort you that ye should earnestly contend for the faith which was once delivered unto the saints. 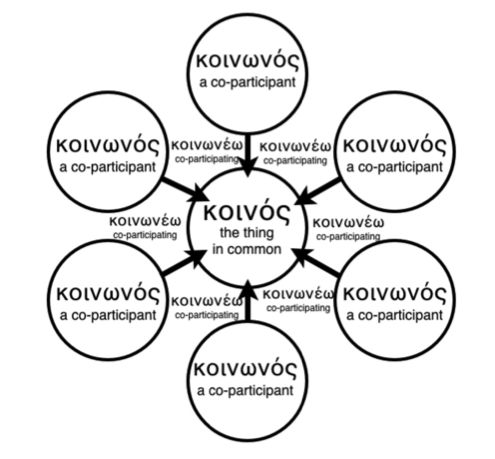 Again, the word COMMON in this verse is translated from the Greek word Koinos/Koivoc. The same word that is translated as unclean in the Mark verse. Again, if unclean is the correct translation then Jude would be saying salvation is unclean if you plug “unclean” into that verse where it says “Common” . Remember unclean in the Mark verse and Common in the verse come from the same word in Greek. It does not mean unclean.  Jude was the brother of Yeshua and a converted Christian after Yeshua  resurrection, he would not say that salvation is something unclean while preaching that Yeshua is our salvation. That would be saying that being saved by Yeshua is unclean. This is just one verse about this subject. There are many others in the Bible and each one has it’s own meaning and not one of them means we can eat what Yahweh has told us is unclean. Hope this helps to clear up some things or maybe it will even plant a seed that only Yahweh himself can make grow. Believe me when we tell you that we didn’t have this same belief until around 2012. We used to squawk at the fact that Christians we know abstained from certain foods. Well, we have seen the message in the Sacred Texts after trying to weed through them over the years. It is all right in front of us, we just have to dig a little deeper and not rely on somebody telling us something without showing it to us in the Bible. Click here to see more information on this same verse.

4 thoughts on “Are all foods clean to eat?”