Did you know the scriptures state the worst thing to have happen to us is to be separated from Yahweh.  In fact, the scriptures state those who will die in the eternal fire will be separated from Yahweh forever (2 Thessalonians 1:9). We have spent quite some time researching the “eternal” torment teachings.  If faith in HIM gives us a promise of Eternal Life then we can’t have Eternal torment because that would contradict Eternal Life.  You either have eternal life or you don’t.  While Eternal Torment would be a horrible way to live the rest of eternity, if this was possible that would mean HE granted you Eternal Life away from HIM and that is not possible.  The only Eternal Life is with HIM.  Now we know you might be saying you were taught differently and we have also sat through sermons where the Pastor warns us of Eternal Torment but NOWHERE in the Bible does that theory hold true.

Modern physics tries to explain that our universe, in all of its vastness, is truly connected like a spider’s web.  All things are undivided and there is no “true” separation between anything in the universe. 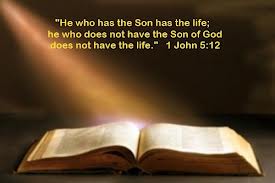 While this may be true, there is one thing that can “truly” separate us from the universe and HIS name is Yeshua.  HE is the one true separator if you will.  On the other hand, HE is the one true combiner.  HE is LOVE.  We can avoid being separated by having Faith in HIM and follow in HIS commands.  We, as Christians, must put down the traditions of men that teach against HIS perfect Word.  We, as Christians, have to realize that 2000+ years of Religion has steered us away from HIS commands given to us.  These include the commands in the Old and Renewed Covenants.  We, as Christians, have to do as commanded and search through the scriptures like the Bereans did.  We, as Christians, can no longer allow Religion to change HIS plan.  Over the last 2000+ years all sorts of theologies and doctrines have been put in place by man just like the Pharisees did long ago.  We know what Yeshua thought of man’s rules.  Man has changed HIS ideology.  Man has changed HIS sacred text.  When we come across the few Christians that follow things like Feast Days or Dietary Law we often jump to a conclusion they are Messianic Jews or Legalistic Christians.  We feel that way because we have been taught by man to feel that way.  The 1st century church didn’t feel that way.  Paul didn’t feel that way. Yeshua didn’t feel that way.  In the end, the goal is to be united with HIM and not be separated. We achieve this by doing Bible things in Bible ways not man’s thing in man’s way.  If we don’t start doing things as commanded he won’t hear us anymore!!! (Proverbs 1:28-29)