There is a difference between Yahweh’s Law given to Mosheh and Rabbinical Law created throughout time and documented in the Babylonian and Jerusalem Talmud.

Here is an example: Numbers 15:37-39 Tassels on Garments   The Lord said to Moses, “Speak to the people of Israel, and tell them to make tassels on the corners of their garments throughout their generations, and to put a co…rd of blue on the tassel of each corner. And it shall be a tassel for you to look at and remember all the commandments of the Lord, to do them, not to follow after your own heart and your own eyes, which you are inclined to whore after.

The lesson to learn here is the difference between what Rabbinical Law teaches and what Yahweh teaches. Rabbinical 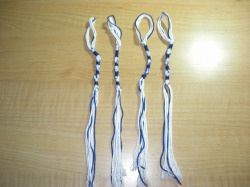 Law demands the “BLUE DYE” used to color the thread in the tassels (TzitTzit) is to come from a snail referred to as Chilazon.   There is not one verse in the Bible that commands the use of a certain snail for the coloring of the blue thread. Jewish Law (aka Rabbinical Law) commands there is a certain snail that has to be used to make the blue thread. Our Messiah came and did away with all this Rabbinical Law while establishing HIS Father’s Law called Torah. The Torah does not command us to use a certain snail for the coloring of the blue thread to make the tassels. We have to learn there is a difference between “HIS LAW” and “JEWISH LAW” and not disregard HIS Law because we think or we are taught it is Jewish.  The traditions of man (Rabbinical Law) even went so far as to not have the “Commanded” blue thread when the snail could no longer be found.  They actually believed it went extinct.  They chose to disobey Yahweh’s Law.  They then started putting the blue thread on their TzitTzit  when they learned the snail wasn’t extinct and became available again.  It is important that we learn the difference between HIS commands and Jewish Law.