Acts 17:11 Now these Jews were more noble than those in Thessalonica; they received the word with all eagerness, examining the Scriptures daily to see if these things were so. If you ever wondered what this verse is talking about, it has to do with the Jews of Berea or better taught as the Bereans. They basically just made sure that the things being taught coincided with the sacred text and not that of man’s tradition.  If the teaching was incorrect they would correct the teaching while making sure all that heard the incorrect teaching knew the TRUTH.

We got asked today about a certain topic in the Bible. We were hesitant at first to give the answer, as we knew that answer would not be taken with an open mind. It was a question that is often asked and the response to our answer is the same from most Christians we talk to; disbelief at first. We had to take a moment to realize that it isn’t about us; it’s about HIM so we continued to give a Biblical answer knowing the answer would not be readily accepted.  We are to “plant the seeds” and let HIM make them grow (1 Corinthians 3:7). 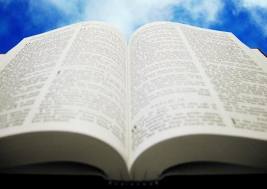 We can’t just be silent when somebody comes to us for knowledge, even if their response will not be what we want. The person asking the question already had the answer they wanted and wanted us to agree with their belief. The question asked then worked its way around to four other people that were in ear shot and they also wanted hear our explanation. In reality it is much easier for us to avoid telling what we know and save ourselves the persecution from the one asking the question. The problem is that we won’t just agree with people to avoid confrontation. Our answers often go against the teachings of man that are frequently adopted as Biblical by many Christians.  We don’t avoid topics to save ourselves persecution. We have a duty and that duty is to be Truthful when we are asked about things that have to do with the Bible. We have learned over the last couple of years to abstain from arguing over Biblical topics. We simply put the information out there and let people decide what they will do with that information.  We are supposed to be planting seeds not trying to grow them.  Again, we are told that only ONE can grow them (1 Corinthians 3:7). We avoid arguments and just put the information out to be absorbed. Some absorb it, some don’t, and some want to demand their man centered tradition is Biblical.  As Mark stated not everybody wants to hear and not everybody wants to see (Mark 8:18).  In fact Jeremiah warned us about this problem long ago (Jeremiah 5:21). All we know is that Matthew told us we would be hated by all for his name’s sake (Matthew 10:22). John tells us to know the Truth and it will set you free (John 8:32). There are often times when the Truth is something that makes us have to change things that we thought were okay. There are often times the Truth makes you second guess man’s plan and realize Yahweh’s plan was different. We are here to spread the Truth. If the Truth goes against what we were taught, then we were taught man’s way and not HIS way. John says that the world will hate the Truth tellers because they are not of the world but in the world (John 15:18-21). Luke also tells us that we will be hated (Luke 6:22)! In reality we aren’t really that persecuted at all.  Here at Biblical Truth we live in the United States and are free to study, practice, and preach the Gospel.  Try living in China where owning a Bible is illegal and that act of preaching the Gospel will get you killed!!! That is true PERSECUTION.  To know that you may die for the cause yet still walk steadfast in TRUTH must be incredibly hard.  We know that people making fun of us for what we do is persecution but it is minute compared to other places in the world.  We take the “jabs” and keep moving along in our Faith.

After giving our answer to the topic we were asked “how could billions of people be doing it one way and that way is incorrect?”  We will tell you this. We all fall short of the glory of God (Romans 3:23), so just because it is done one way for centuries doesn’t mean it is the right way. Man’s tradition has molded society to stray from HIS precepts.  Only HIS way is the right way. If we see that “everybody” is doing something it usually throws up a red flag to us and then we research it.  Look at it this way.  In the end times we are told that the “whole world” will follow after the beast (Revelation 13:3).  So in the end if “everybody” else is doing it, does it make it right to do?  The answer is simple; NO!!!  There will be plenty of people persecuting those that don’t follow after the beast and guess who will be right?  The ones not doing what everybody else is doing will be correct because the ones doing it go against HIS perfect WORD.  We are supposed to be a separate people amongst the many (Leviticus 20:26) (2 Corinthians 6:17).  We submit to you that if you question something, look it up in the Bible and see what Yahweh thinks about it.  The Bible is where you will find the true answer.  If your local Church teaches you something that is not Biblical then you should correct the teaching.  If your pastor says something is okay that Yahweh says isn’t, you should correct the teaching.  We can’t keep going along in life doing things in man’s way.  We can’t go along in life and allow HIS message to be changed.  All we can hope is that the information we gather and put on this website can help lead us and others closer to Yeshua.  We do this for everyone including our children.  Hopefully when we are long gone in our resting place, our children will pick up where we left off and continue this site.  Hopefully they will then pass it to their children.